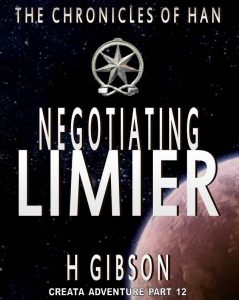 To all who have asked to share in more of Han’s adventures.

Please be aware that this is not a stand-alone chronicle, but the subsequent adventures as experienced by Han.
Readers who are not familiar with The Chronicles of Han are advised to refer back to the original books if necessary, as well as to the updated sections in the back of this book.

For the good of the Navigator’s people and planet,
for the future of his children, and his own sanity,
Love served as the ultimate motivation.
I am Han, and this is my life-memory . . .

Without speculation, in bold letters, the newspaper stated as confirmed fact:
“HAN STORM IN LOVE
Han Storm has a new woman in his life.
Who is this mystery woman at our most famous widower’s side? Who has captured the attention of our psychic? Where did they meet? Is she going to be allowed to accompany him on his travels? Are they romantically involved as it looks on the photographs?”
A short write-up followed where they speculated that this was the only opportunity to show the new woman in my life off publicly. It was rumoured that she was from the Altneght Clan and that I must be infatuated with her because of the subsequent photographs taken at Altneght which covered the next page as well.
Excerpt from: The Chronicles of Han: Creata Adventure: Negotiating Limïer, Part 12