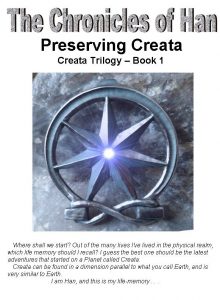 "Where shall we start? Out of the many lives I’ve lived in the physical realm, which life memory should I recall? I guess the best one should be the latest adventures that started on a Planet called Creata. Creata can be found in a dimension parallel to what you call Earth, and is very similar to Earth. I am Han, and this is my life-memory . . ." - Han Storm

The Chronicles of Han describes the journey of Han Storm, a young man that has psychic powers. Han always knew he was different, but when forced into his Destiny he had to rapidly expand his gifts. All this to be able to regain lost knowledge of science and inter stellar travel to save his home planet that was being abused by over exploitation. The Chronicles of Han starts innocent and naive, following Han’s life in a roller-coaster adventure of emotional and physical growth stretching over space and time and dimension, visiting unfamiliar worlds as never experienced before . . .